Safety, Security & Peace Of Mind For Your Vessel

Safety, Security & Peace Of Mind For Your Vessel 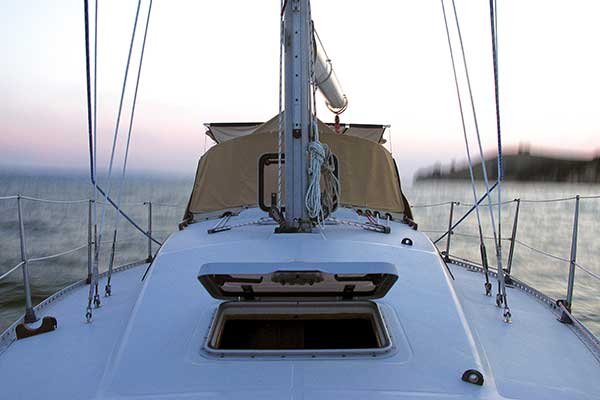 My first boat security system cost around 10 bucks. It came from RadioShack and wasn’t just for boats. Two little components were fastened to my hatch and hatch frame with sticky tape. When their magnets separated, an alarm sounded. It always let me know when the sticky tape came unstuck, except when I wasn’t onboard. If I were a thief, I’d have simply pulled the alarm component off and thrown it overboard. Today, boat security systems have gotten much more sophisticated and can cost anywhere from $100 upwards. They can tell you anything you want to know (but perhaps wish you didn’t). It’s simply a matter of what you need, and how far you want to go for protection.

Simplistically put, notification of alarm events can be at three different levels.

The last two require an appropriate communications capability on your boat — either cellular or other Internet access device, and/or a satellite communications device. These may be a part of the system you purchase. With some systems, you pay a one-time fee to build your system, or a fee to establish a basic system, which you may add to later. With systems that communicate, you also pay a recurring fee for monitoring and communications.

Systems can utilize multiple sensors, depending on what you wish to monitor and how much you’re willing to pay. The sensor is the device that detects an alarm event, then communicates via the system to a local alarm or monitoring service or owner. That which a sensor monitors is often referred to as a “zone.” For example, a hatch may be referred to as “zone 1.”

When shopping systems, ask about the price of the system and the monthly charges to get an accurate picture of the true cost.

We’re all familiar with high-water, fire, and intrusion sensors. But even these have different levels of sophistication. For example, there are sensors not just for high water but also for irregular bilge-pump cycles, which would indicate future flooding. We’re also familiar with “burglar sensors,” which tell that a door or hatch is open. Sensors can now detect deck vibration to indicate that someone has stepped aboard. Motion sensors can alert to motion within the secured cabin spaces. Sensors can also tell you if the engine has been started, if there is a dangerous noise such as glass breaking, or even if the boat has moved away from the dock, or from a GPS-determined perimeter around a mooring. You can even get sensors that let you know if a cockpit cover or bimini has been unsnapped.

There are also sensors that can detect when a component such as a radar or chartplotter or outboard has been disconnected. At this point, it may be too late for a remote owner to intercede, but you can buy systems that can track the boat or outboard using GPS. Many systems include cameras that record, like a typical security camera in a store, or also broadcast so that you can see what’s happening aboard even though you’re not there. This may allow you to make a more informed decision as to the action you’d like to take.

The information “sensed” must be effectively communicated. Do you want just a bilge alarm that sets off a horn so that those at the dock know you’ve got a problem, or do you want it to let you know even if you’re on another continent? And do you want the ability to “do something” remotely? The range of possibilities is huge.

When you can respond to your boat, you can do things such as turn on floodlights. This is handy for scaring off boarders and also handy when you’re going to arrive at the marina after dark. You can kill your engine(s) if you’ve been notified that the boat has moved beyond its designated perimeter. You can switch to a different battery bank for more pumping power, or release deterrent gases inside the cabin spaces.

The following examples may help determine what is appropriate for you. Product options and prices change frequently. There are additional choices not represented here. Be sure that your product will have stable and long-term support. Get it in writing.

The GSM Marine Guardian | $695 ($29.95 monthly service)
Wireless, GSM antenna, sensors for water level and power loss; additional sensors available. Remote-control key fob. Capabilities: Basic system sends an alert to your cell phone for high water or lost power; can reach you as long as it has cell phone service; alerts can be sent to 3 phone contacts; can disarm, update, view event history and status via Internet.

The Tricked Out Solution 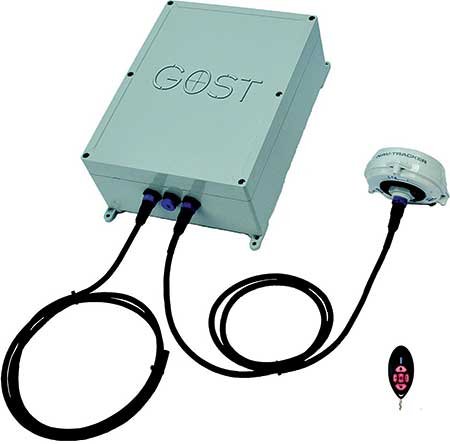 GOST NT-Evolution 2.0 | $2,999 ($36 monthly service); Gostglobal.com
Tracking, Geo-Fence, wireless sensors, and relays. Wireless key fob arm/disarm and relay control. Geo-Fence and full system arm/disarm from website, and global-relay control. Up to 64 water-resistant wireless sensors including infrared beam, high-water, door/hatch contact. The GOST system will notify up to 10 recipients via email/text utilizing the Nav-Tracker antenna and will call/text up to 8 recipients when the boat is within cellular range.

SPOT Trace | $99 ($99 yearly service) findmespot.com
Small (2-inch-tall) battery-powered GPS tracker sends alerts to your cell phone if movement is detected. View your boat’s coordinates from your smartphone or online at any time.

Once you’ve decided what you want to know and how you want to be notified, it’s important to consider how the systems work on your boat. Quality is always important, but particularly so in a marine environment. For example, most security systems beyond a simple high-water local alarm have small dedicated “computers” (control units) to handle the event. There may be a benefit to having your sensors communicate to the computer wirelessly. Wire runs on a boat can be difficult and expensive to install and subject to corrosion or even destruction by the event itself. However, inter-component wireless communication must be on frequencies that don’t suffer from interference from other broadcasters or cause such interference.

Other issues include attention to details of sensitivity. Motion sensors within a cabin can be helpful, but not if they’re going to pick up a curtain swaying as the boat moves. And most boats at one point or another may pick up a cockroach or two, or a rodent. A motion sensor must be oriented and programmed to sense only alarm events, not normal boating occurrences. There are sensors that exclude “body mass” below a certain limit or movement below a certain height. A vibration sensor mounted under a deck to detect someone stepping aboard may be far more useful if you can turn it on and off remotely. A marina employee may need to step aboard to protect your boat or one nearby. Also it should differentiate between a step aboard and the boat’s lightly hitting the dock because of a gust of wind or a wake. And be sure to get a reliable company that you know will be around to monitor and/or service your system.

Yet another issue is power source. Typically alarm systems are powered by the DC battery banks – usually the most reliable power source aboard. But batteries fail and a good system should have built-in backup batteries. Usually the sensor itself is exclusively battery powered, and a quality sensor alerts you if its internal batteries are near depletion. These are but a few of the quality issues you should consider as you decide the type of security system you want.

By Tom Neale at Boat US Magazine